What a delight this is! I’ll get on to the performances in a moment, but I have never seen so sumptuous a CD package. There are 99 pages, in five languages, line drawings, and copious photographs of instruments and performer. Specifications of both instruments are given. Loreto Aramendi is an outstandingly engaging performer, who is principal organist at the Basilique Santa Maria del Coro, where she presides over a Cavaille-Coll of 1863. She has also an international career, and has recently performed in the UK. She studied initially in Spain, and then in Lyon and Paris. She is currently a professor at the F. Escudero Conservatoire in San Sebastian. Both instruments heard on these two CDs are of the late Baroque period. The Ecchevarla of 1744 being the more comprehensive, and the 1765 Bosch rather smaller. Both are magnificent — with just the clarity for which one would hope. The programme, focussing mainly on the 15th-18th centuries, is naturally chosen to showcase the instruments and the acoustic —this aim is achieved. That acoustic clarity is demonstrated in the player’s articulation, too. (I’ll leave the finale of the Bruna Tiento to those who listen — I just cannot put into words the glory of the sound.)

Pieces range across western Europe from Germany to Spain, and Italy to England. Unsurprisingly, perhaps, these instruments excel in their mutations and reeds — and Ms Aramendi evidently revels in them. However, the performances are always superlatively musical, and dramatic. The Corrette pieces and the de Grigny, with the latter’s echoes, demonstrate the dramatic elements well. The five pieces from Hugo Distler’s Op.18 are the exception to the general chronological arena, but suit the instrument completely — and allow us to hear some of the quieter flues. Sweelinck’s evergreen Mein junges Leben hat ein End is all I like it to be. On the smaller instrument, the English composers fare well, with idiomatic performances enabling an appreciation of music, performance, and instrument enticingly in concert with each other. Organists’ Review covers such a panoply of reviews of so much music and music-making that it would be wrong to write too much more — these two CDs contain so many riches. The recording techniques are exemplary, and, as I mentioned at the outset, the total production value is excellent. This is, to my mind, a must have! 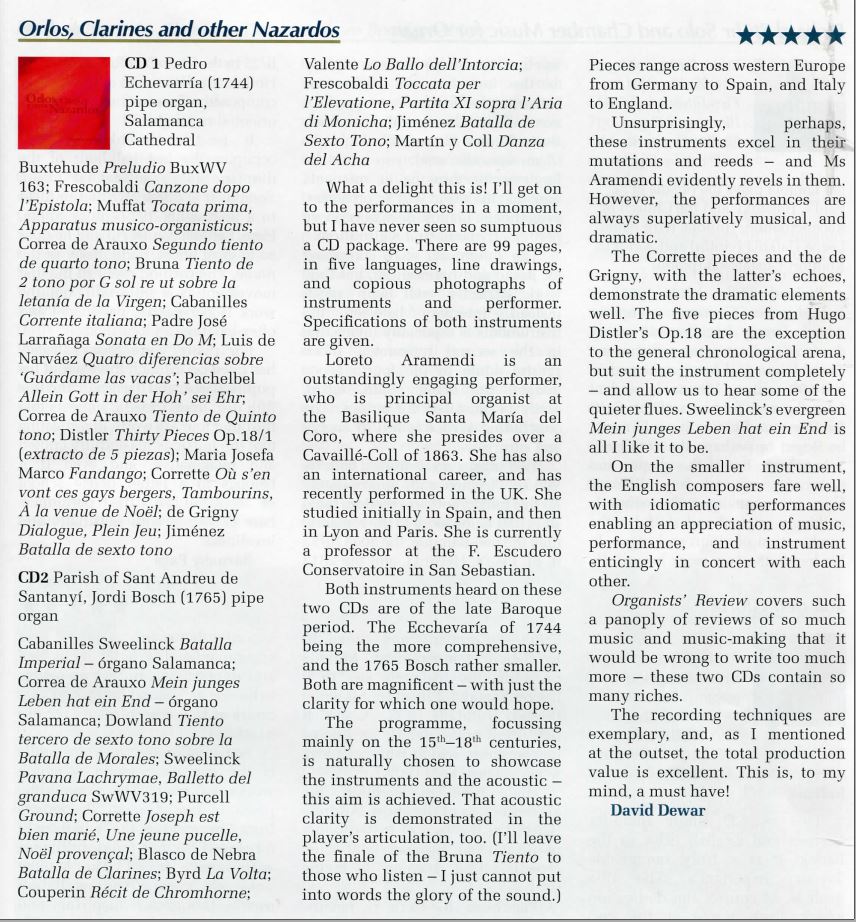